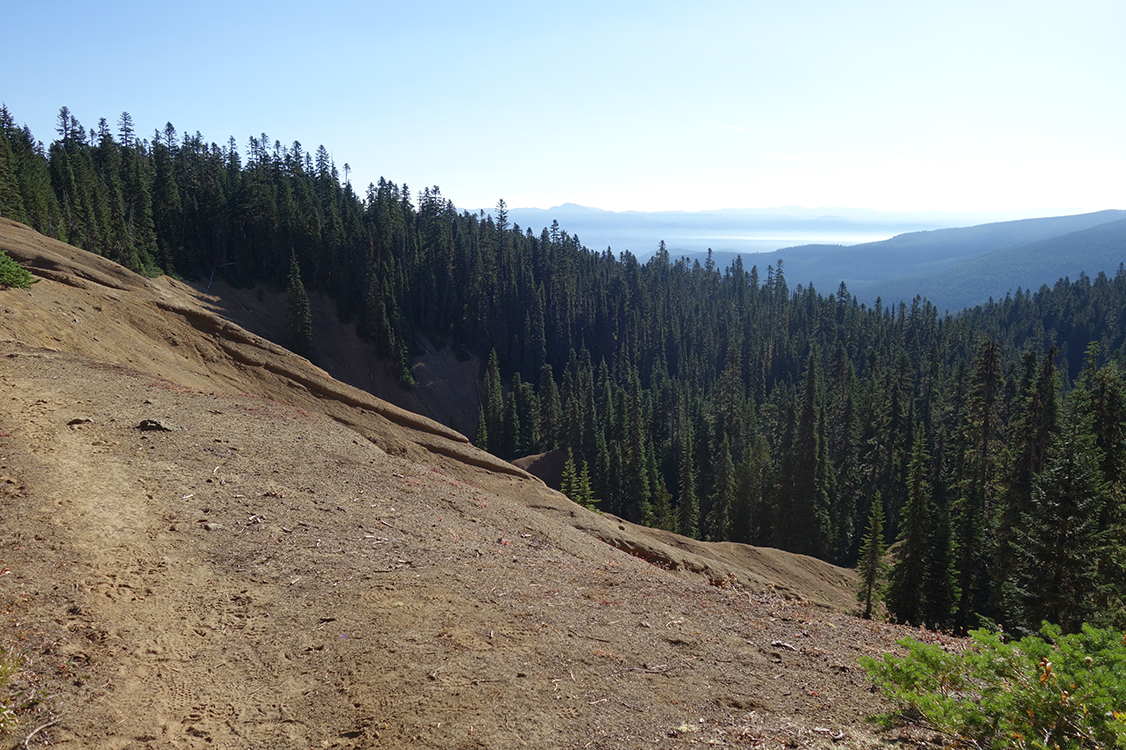 Dark Sun Monday along the PCT

Washington’s Northern Cascades abound with unforgettably picturesque sights—so many that the days can tend to merge into one another, especially when you’ve seen the same hulking, massive, snow-covered stratovolcano in front, to the side, and behind, looking imposing from every angle. Mount Rainier is definitely unmistakable, whether your vista is from the trail or a sidewalk table at a coffee shop in Seattle’s Fremont District. Trudging north near Scout Pass, I snagged a quick shot of Rainier looming over Crystal Mountain before wandering on to that Sunday’s destination near Arch Rock Trail.

Monday morning, August 21, 2017, was a clear and refreshing day. I had nothing much on my mind except making some more miles and taking notes. That lasted for about 10 minutes when I spotted a PCTA “volunteer work party” sign at the trail junction. I was in the Norse Peak Wilderness (which would burst into flames within days after I passed through) and I did not expect to see a work party in this remote area. But as I rounded the trail just a mile past the Arch Rock Trail junction, I encountered four members of the North 350 Blades Crew: Paul, Linda, Gordon, and Jeff, who were engaged in what appeared to be completely daunting work.

Apparently, the PCT tread had formerly passed directly by a massively tall conifer with an extremely impressive root ball. I know this because the tree was on its side with the root ball entirely aboveground. It was much larger than me, for sure. In fact, it was larger than each of the volunteers, but none of them were deterred in the least by what appeared to be a very taxing task ahead of them. The trail had been rerouted around the fallen tree and its attached root ball, so they wanted to reestablish the tread and close the reroute. (They seemed so nonchalant about it too.) I cringed while asking, “How you gonna do that?” and widened my eyes as they just motioned to their answer—pointing only to their shovels and loppers. With these tools, the crew moved the dirt from the root ball to the former hole and cut back the roots so hikers would not be impeded as they passed. It was truly impressive. But there was more.

I’m thankful to those folks not only for handling the reroute situation, but especially for reminding me that this was the day of the solar eclipse, which they also wanted to see. One of them clued me in to a vista point on the trail about a mile north that they had scouted earlier. Surrounded as I was by tall trees, I had wondered how or if I would be able to actually observe the eclipse. But, in exactly a mile and about 10 minutes prior to the eclipse, I arrived at an incredibly well-placed viewpoint. In fact, it was the remaining 20-foot-wide and 100-foot-long portion of bare soil left atop one of the many landslides visible in the surrounding terrain, yet it was nicely backed up by conifer forest and fronted with a canyon and low surrounding hills—perfect for unimpeded viewing.

Just as the show was about to start, along came the North 350 Blades crew, plus two southbounders and a few northbound section hikers. Then, at about 9 a.m., we began to watch the near total eclipse—with Jupiter, Lucky Charms, and Bang Bang sharing eclipse-proof glasses (which I was lacking), while strategically snacking, foot-resting. and talking trail trivia. As expected, the moon did its thing and sent the sun into hiding. We had a nice amount of shade for a while. The sky never became totally dark, birds did not stop singing, forest animals remained silently behind us, and each of us took in the noticeable lack of sunshine behind the safety of dark glasses. Many minutes later, we murmured approvingly along with everybody attending, agreeing that this had indeed been a worthwhile stop and a good show by the sun. We’d all go see it again.

Totality escaped us that day, but it was close enough to remember for a long time to come. The eclipse and the camaraderie won’t soon be forgotten.

Jordan Summers is the author of numerous hiking guides as well as Wilderness Press’ recently updated series to the PCT.