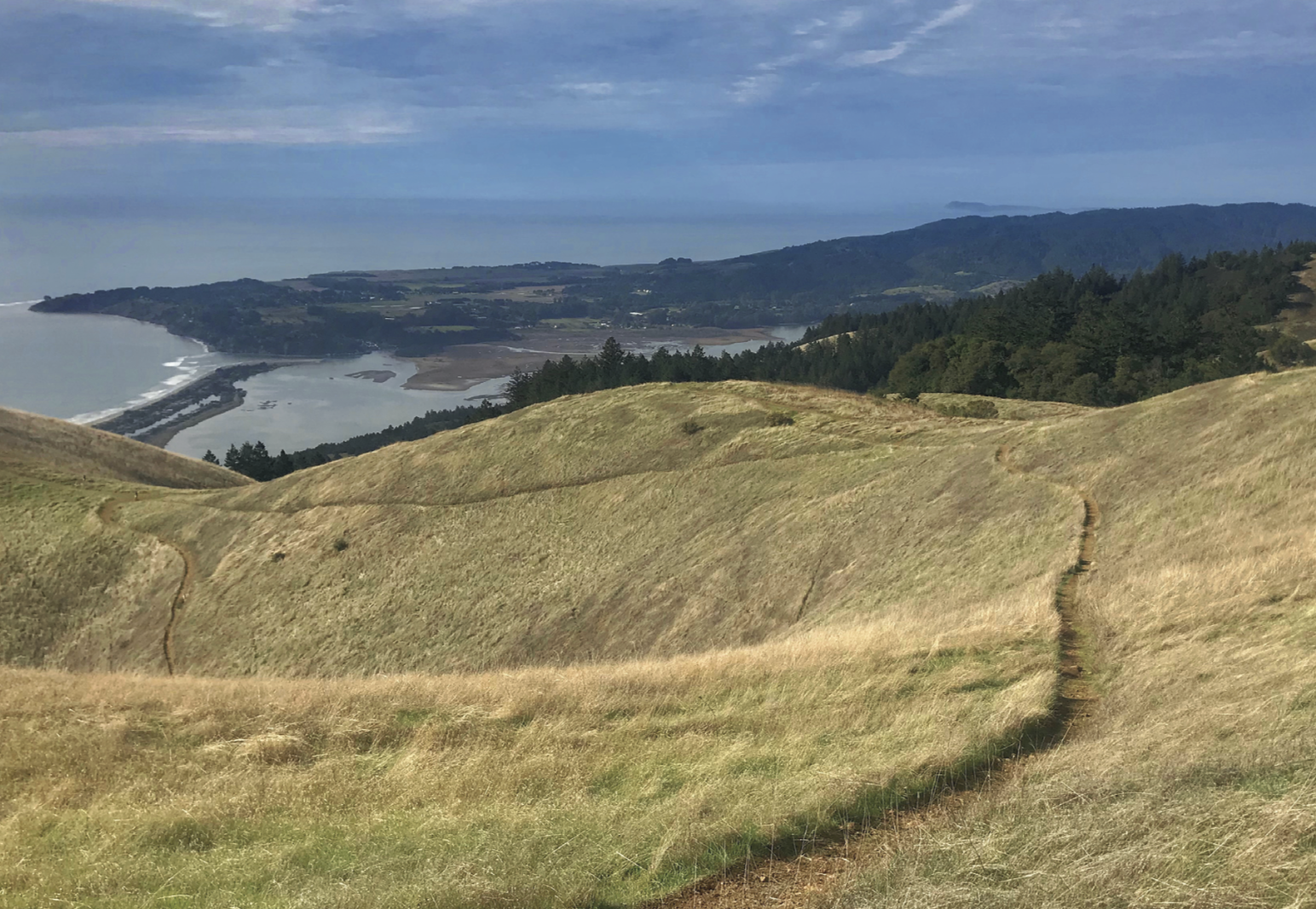 Earlier this week we shared tips about how to plan a self-supported adventure. And nowhere is better or more convenient for a day outdoors than a long, scenic, well-marked trail.

There’s one trail in particular we’re partial to this summer—the 375-mile Bay Area Ridge Trail. It’s close to the Bay Area so you won’t spend lots of time driving. The trail is turning 30 and there are lots of celebrations like the Ridge Trail Challenge and other events. Plus, we have the new edition of our Bay Area Ridge Trail guidebook by Elizabeth Byers.

Here’s our suggestion of the ultimate Bay Area Ridge Trail hike to choose this summer for a long self-supported adventure.

High on the slopes of Mount Tamalpais and along Bolinas Ridge, this route takes full advantage of the mountain’s breathtaking views, forested glades, and grassy slopes. The views to the ocean out over the steep open slopes are unsurpassed. Coastal fog often obscures vistas in the morning and late afternoon.

Hikers begin on the Matt Davis Trail, at the stone steps across the Panoramic Highway from the Pantoll parking lot. This old but well-kept singletrack trail crosses the mountain and descends to Stinson Beach. A favorite of many hikers, it is named for the so-called dean of Mount Tamalpais trail builders and has been built and rebuilt over the years.

The trail winds in and out of a tree-filled gully—again on grassy slopes—and at 1.6 miles reaches the junction with the Bolinas Ridge Trail. Veer right, and the Matt Davis Trail continues down to Stinson Beach.

The Bolinas Ridge Trail resumes beyond the McKennan Gulch Trail gate and then drops down below the road. Soon you leave Mount Tamalpais State Park and enter the Golden Gate National Recreation Area. The trail follows close to West Ridgecrest Boulevard.

An unpaved road, mostly downhill, runs along the crest of Bolinas Ridge, and from its heights you have magnificent views of the sparkling ocean, Tomales Bay, Point Reyes Peninsula, tree-covered ridges, deep canyons, oak-dotted hills, and distant peaks. On Bolinas Ridge, you travel through damp forests on soft and springy leaf duff; wind through tall chaparral on bare, rocky sandstone; and cross open, cattle-grazed grasslands. After descending to Lagunitas Creek, the shaded Cross Marin Trail is paved from Platform Bridge southeast through Samuel P. Taylor State Park. Weather and temperature vary: On Bolinas Ridge, long, exposed stretches of trail can be windy, hot, or foggy.

To start your trip at the Bolinas–Fairfax Road summit, hikers, equestrians, and mountain bikers walk or ride into the cool dark Douglas-fir and redwood forest. Along the way you pass trails named for early landholders and tread the paths of Mexican ranchers, Anglo settlers, rugged loggers, and prosperous dairymen. At 0.6 mile, after you ascend a hill, the forest thins out and the ocean is far below on your left; farther down the trail you have views of Bolinas Lagoon. Look south behind you to see Mount Tamalpais, Marin County’s most prominent landmark.

Just before 1 mile, the view begins to open to the east, and at the top of the ridge you can see the bay and Mount Diablo. Coast live oak, madrone, monkeyflower, and chaparral pea also line the trail.

After 3.4 miles, you pass the McCurdy Trail, which descends to CA 1 at Woodville (also known as Dogtown), where a number of lumber mills once flourished. Stay on the Ridge Trail and continue through a luxuriant second-growth forest. At 5 miles, you reach the Randall Trail, which also descends to CA 1 in Olema Valley. At 6 miles you pass the Shafter Trail, named for the Shafter brothers, astute lawyers from Vermont who became rich landowners in Marin County.

Beyond the Shafter Trail junction, the Bolinas Ridge Trail is completely out in the open; it drops into little ravines and then climbs rounded knolls to take in views toward wooded Inverness Ridge and Tomales Bay. Shortly before coming to the Jewell Trail junction at 9.8 miles, you reach the top of a ridge with excellent views of Black Mountain and Point Reyes Station. At the junction, take a right on the Jewell Trail; the Bolinas Ridge Trail continues 1 3 miles north to Sir Francis Drake Boulevard.

You descend rapidly to a gate at the Cross Marin Trail on the edge of Lagunitas Creek Samuel P Taylor’s mill on this stream, formerly called Papermill Creek, once produced paper bags and newsprint for San Francisco. The Bay Area Ridge Trail route turns right on the wooded Cross Marin Trail; in 0.2 mile it enters the 2,700-acre Samuel P. Taylor State Park, and in another 0.5 mile turns into pavement as it passes through campgrounds in the redwoods.