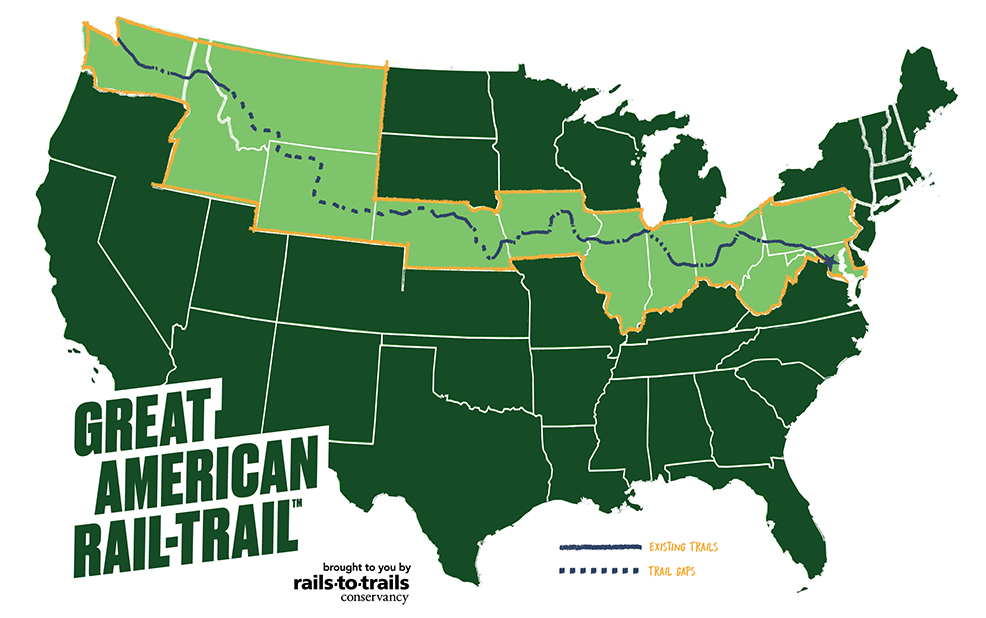 “The possibility of a rail-trail that spans the country has been known since the mid-1980s. As RTC stood at the forefront of the trails movement that was emerging across the country, it tracked rail-trails being developed east to west along the same course charted by the railroad a century ago. Now, analysis of RTC’s database of open trails shows that the Great American Rail-Trail’s preferred route is more than 50 percent complete—the milestone RTC has long identified as the threshold for committing to make this trail a reality. With that milestone in hand, RTC has committed to bring its national expertise and resources to bear in connecting the people and the infrastructure necessary to deliver the Great American Rail-Trail to the country.”

People have always found ways to cross the country on foot, on horseback, or on bike. But now, thanks to the Great American Rail-Trail, we will be able to safely move across the country on a continuous route that is 80% free of cars. That’s over 3,700 miles of scenic pathways to traverse without looking over your shoulder for tractor trailers!

And, each individual rail-trail is steeped in history. People will be able to walk or ride along old rail lines and often see remnants of trains that traveled on the very same routes.

This announcement is wonderful for trail towns as well. Businesses and restaurants and visitor’s centers will be able to extend a warm welcome to those who pass through their small towns.

Wilderness Press is no stranger to rail-trails. We have been working with the Rails-to-Trails Conservancy for many years to publish guidebooks for multiuse trails across the country. So we cheered extra loud when we saw rail-trails included that we are already very familiar with.

To read more about the pathways along the Great American Rail-Trail, stock up on our Rail-Trails series!