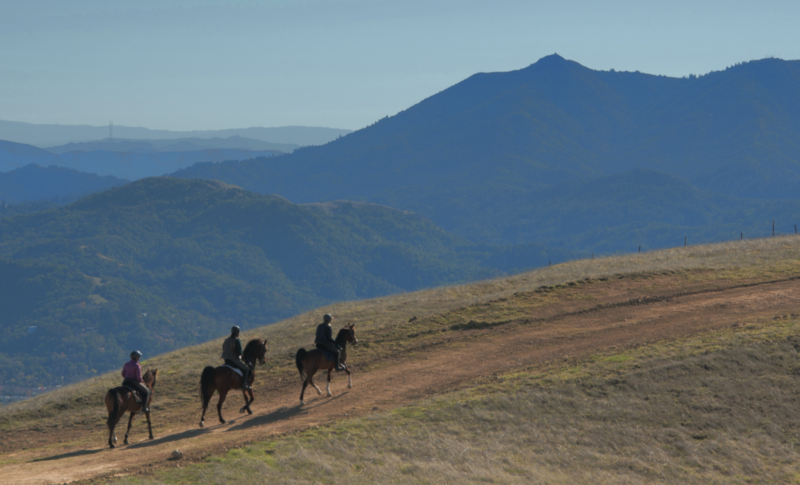 A combination of unique characteristics primed the Bay Area for the establishment of the Bay Area Ridge Trail: a glorious physical setting; a long history of outdoor recreation; a growing greenbelt; a conservation ethic; and a population of avid outdoor enthusiasts, conservationists, and willing volunteers. Designed as a multiuse ridgeline route for hikers, bicyclists, and equestrians (and some sections for wheelchair users), this planned 550-mile trail, nearly 70 percent complete, connects public parklands and watersheds of the Bay Area greenbelt that circles San Francisco Bay.

For those who want to experience all that the Bay Area Ridge Trail has to offer, they can circumnavigate the entire 375 (and growing) miles, either in one intensive effort, or over time. The list of circumnavigators grows every year. Walking or riding every mile gives one the opportunity to explore new parts of the Bay Area; for the curious and adventurous, this is an extremely satisfying experience.

When William Penn Mott Jr. was general manager of the East Bay Regional Park District in the 1960s, he proposed that a trail be established around the entire ridge of the Bay Area. His vision also included a trail around the bay, close to the water, and connector trails to the Sierra Nevada. Mott went on to serve as director of California State Parks and later of the National Park Service. In the late 1980s, he lent his strong support and encouragement to achieving his vision of a ridgeline trail around the bay.

In 1986, People for Open Space (POS), the predecessor of Greenbelt Alliance, began an effort to acquaint the City of San Francisco with the public-access policies of the region’s water departments. POS brought together the managers of water departments; county, regional, state, and federal parks departments; trail activists; and leaders of environmental organizations at a meeting in 1987, intending to demonstrate to San Francisco that less restrictive public-access policies used in other Bay Area watersheds did not harm water quality. As an important outgrowth of that meeting, these groups recognized that watershed lands, parks, and preserves that surround the bay could be linked with a regional trail.

A coalition of activists, spurred by the energy and commitment of William Penn Mott Jr., established the Bay Area Ridge Trail Council in late 1987. Brian O’Neill, superintendent of the Golden Gate National Recreation Area (GGNRA), was the first chairman, and the National Park Service was a major financial supporter of the project during the first seven years. The outpouring of support for the Bay Area Ridge Trail led the informal council to incorporate in 1992 as a nonprofit organization. Today, the council has seven staff members and a dedicated corps of grassroots volunteers.

As of late 2018, 375 miles of the Ridge Trail have been completed and are dedicated, signed, and in use. Many additional miles of trail are being planned or are under construction for dedication in the near future. Nearly three quarters of the dedicated miles are open to all users (hikers, equestrians, and mountain bicyclists). The total Ridge Trail mileage is primarily calculated along the main route on a single alignment and does not include alternative, spur, or access trails to the main route. Most of the developed trail traverses public parklands around the Bay Area, but about 7 percent of the trail miles cross private lands, many held by nonprofits.

The Bay Area Ridge Trail vision has always included the idea that ultimately one could travel continuously around—or circumnavigate—the entire route. As increasingly longer stretches are joined, multiday, overnight trips become possible. As of 2018, hik- ers can explore 87 miles of continuous Ridge Trail from CA 92 in San Mateo County to northern Marin County (with only a 0.9-mile-long navigable gap), and 46 contiguous miles in the East Bay.