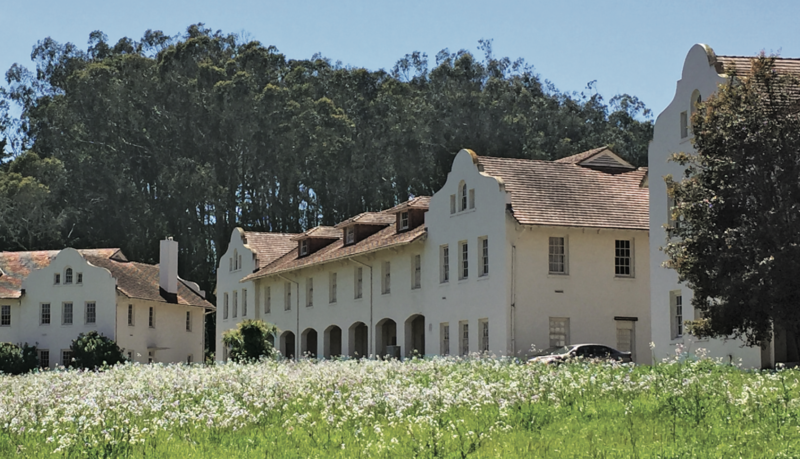 Walking Through History in The Presidio in San Francisco

Exploring The Presidio is a fantastic way to spend a weekend afternoon. You can literally walk back in time to San Francisco’s Spanish period, then casually take a selfie with the Yoda statue, all while enjoying stunning views of the Golden Gate Bridge.

In honor of the NCIBA Spring Workshop in The Presidio, where author Kathleen Dodge Doherty is showcasing Walking San Francisco, here is an excerpt of her walk from The Presidio.

The Presidio, along with Mission Dolores, was just about all there was to San Francisco during the city’s Spanish period. It was Spain’s military outpost, linked to the mission by a trail that later became Divisadero Street. Its location overlooking the Golden Gate was suitable for guarding the entrance to San Francisco Bay.

The Presidio’s 1,000 acres remained a military outpost under the Mexican government. Later, under US rule, the Presidio was an Army base until 1994, when it was turned over to the National Park Service. As a park, it has a lot to offer. Its historic buildings include one of the city’s very oldest structures, as well as many buildings from the Civil War period. Some rows of military housing built in the Colonial Revival style resemble a Norman Rockwell vision of small-town American life, with wide porches and plenty of red brick and white trim. San Francisco’s most recognizable architectural feature, the Golden Gate Bridge, touches down on the park’s northern tip.

Start at Crissy Field, where San Franciscans come to appreciate their bay, and walk in the direction of the Golden Gate Bridge. The level, grassy strip to the left was an airfield, formed by the army in 1919. These were fairly early days in the development of flight, and many landmark voyages took off or landed here, including test runs at transcontinental flights.

Just beyond Crissy Field is the Warming Hut, a welcoming gift shop, bookstore, and snack stand housed in a historic 1909 building that serves up hot beverages and sandwiches made with local and organic ingredients.

Backtrack toward the Warming Hut and follow those steps you passed earlier. Toward the top, bear right on the trail that leads to Battery East. Built in 1876, this armed lookout is one of many built in the latter half of the 19th century along the bluffs overlooking the Pacific.

Be sure to make a stop at the charming and folksy Presidio Pet Cemetery, where you can pay respects to well-loved critters named Skippy; Knucklehead; and Peep, Pet Pigeon of Johnnie Burke. It’s by turns touching, humorous, and overblown.

After your visit, return uphill on McDowell Avenue and turn left on a trail marked Presidio Promenade to Lincoln Boulevard, which sweeps past the military cemetery on its way to the Main Post and Parade Ground. Just past the military cemetery, you’ll reach the Korean War Memorial, on your left. Established in 2016, this beautifully planted and informative tribute honors those who served in the so-called forgotten war.

Along Montgomery Street, you will note the historic Colonial Revival structures, uniform in design, that were once barracks housing for enlisted men. Where Sheridan meets Anza Avenue, you will find the historic Powder Magazine, which dates back to the Civil War and now houses an indoor Andy Goldsworthy sculpture, Tree Fall, instead of gunpowder and munitions. Nearby is the Presidio Officers’ Club, which still has some adobe walls from the original commandant’s headquarters, built in 1776.

The opposite end of the Parade Ground brings you back into more modern times. You will come across the Walt Disney Family Museum, which chronicles Disney’s life and career from Steamboat Willie to Tomorrow- land with drawings, home movies, and innovative machinery. The Presidio Transit Center and Cafe, which has the best grab-and-go food, wine, coffee, and pastries of any bus stop we’ve ever seen. Then you can walk along Letterman Drive to the Letterman Digital Arts Center, where many branches of George Lucas’s multimedia empire are based.

Nearing the end of your long walk, you’ve certainly earned a beer at Sessions, if you feel so inclined. They fancy themselves a “New American Public House,” and everything here is sustainably harvested and locally grown. They boast more than 100 craft beers and an extensive cocktail menu as well.