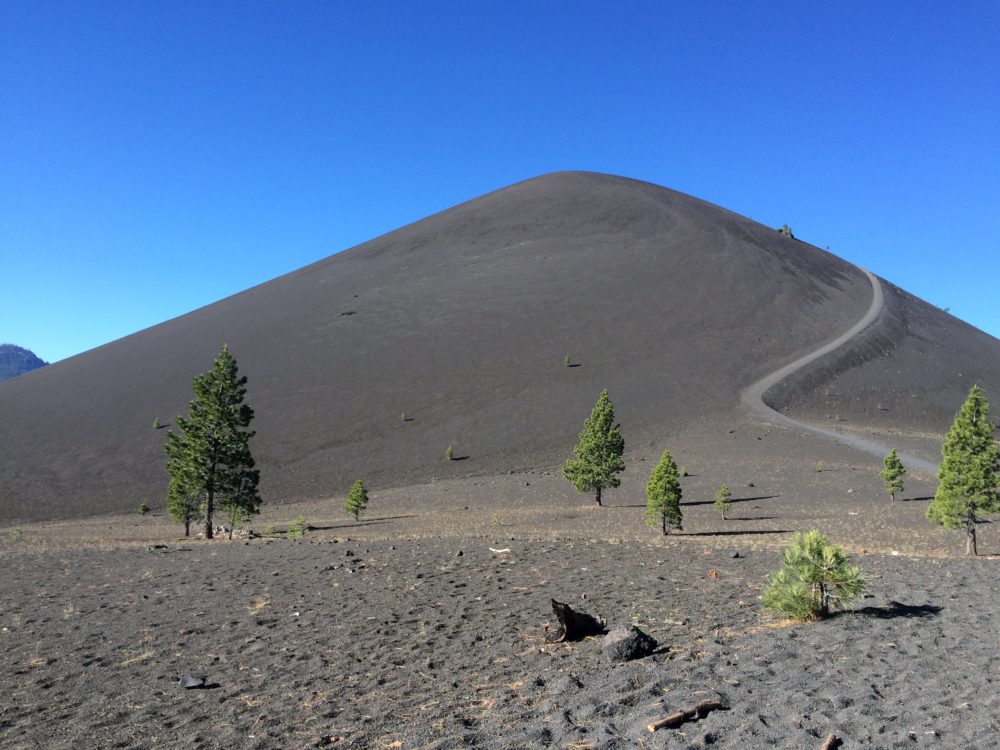 Hike Inside a Volcano in Lassen Volcanic National Park

Back in June, I got to meet Mike White, author of Lassen Volcanic National Park, at two Sportsman’s Warehouse events in Reno and Carson City, Nevada. He strongly encouraged the #YourLead van to pay a visit to Lassen Volcanic National Park, an often-overlooked park nestled in Northern California. With his descriptions of the scenery being a fascinating dichotomy of towering, snow-covered volcanoes and barren, martian-like landscapes, Heidi and I didn’t hesitate to fit this park into our itinerary. 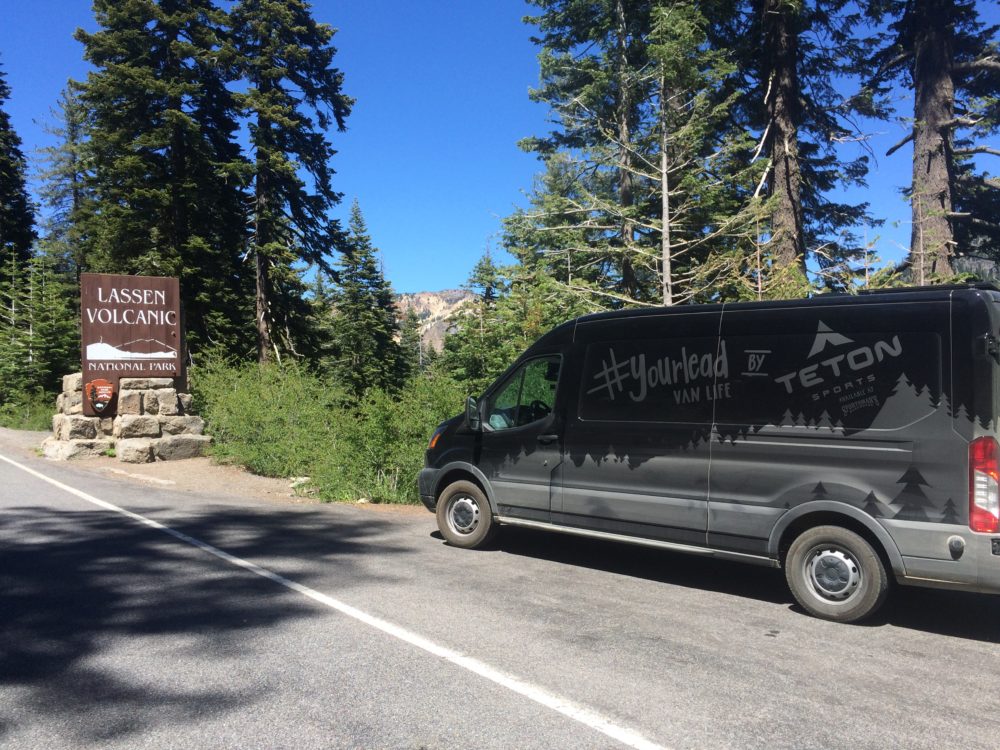 Betsy the van posing in front of the sign.

After a brief visit to Crater Lake National Park, the #YourLead van wound its way along the Lassen Highway, pausing at overlooks to gawk at miles of mountains and volcanoes and to stretch our legs on a hike to King’s Creek waterfall and Manzanita Lake.

After learning from park rangers that Brokeoff Mountain and Lassen Peak were too snow-covered to summit safely, Heidi and I chose Cinder Cone as our Big Hike in the park. This was a fantastic idea! With black sand, lava fields, rich history, and a volcano, hiking to the summit and then down inside Cinder Cone was the most unique hike of the trip. 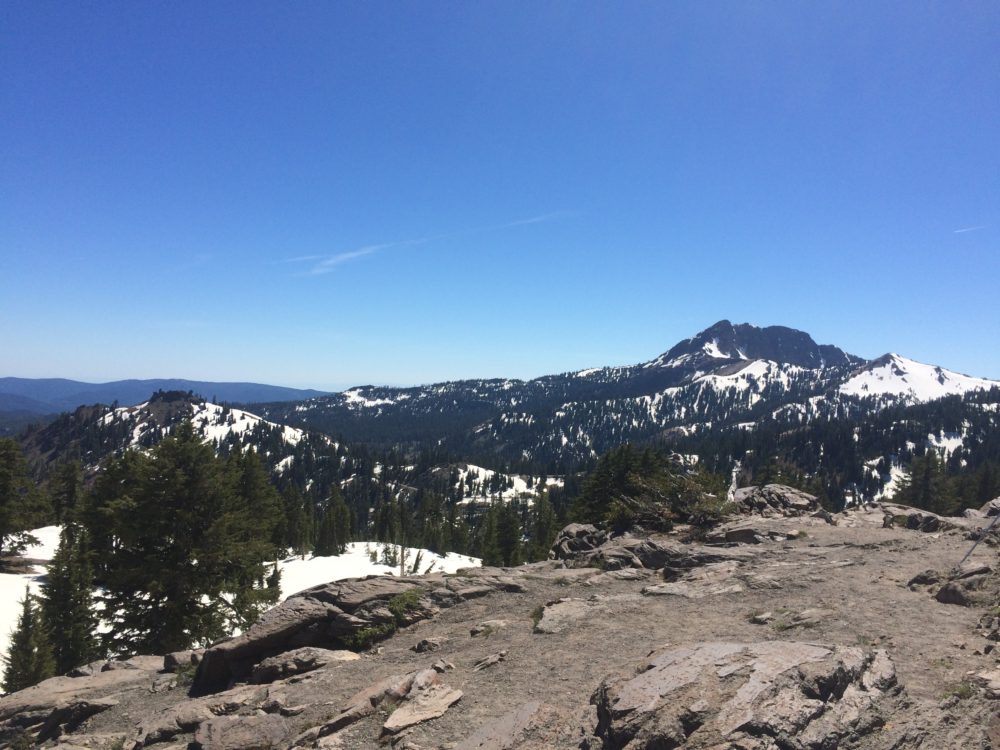 If you’re planning a visit to Lassen Volcanic National Park, drive to the far end of the park to visit Cinder Cone. It will be unlike anything you’ve experienced in a California National Park.

A number of signs providing interesting tidbits about the geology and history of the area greet hikers at the beginning of the Cinder Cone Trail. Gently rising tread leads southwest through Jeffrey and ponderosa pines past a junction with an unmarked path from the campground. Proceed ahead to a junction with the Prospect Peak Trail at 0.5 mile.

From that junction, continue straight ahead through loose, volcanic soil along the edge of the Fantastic Lava Beds until the trail veers slightly southwest and the grade increases. Near a sign warning visitors to stay off the cinder field, the pine forest nearly disappears, allowing the dark hulk of Cinder Cone to burst into full view. Proceed across the bleak and open terrain to a signed junction at 1.4 miles. 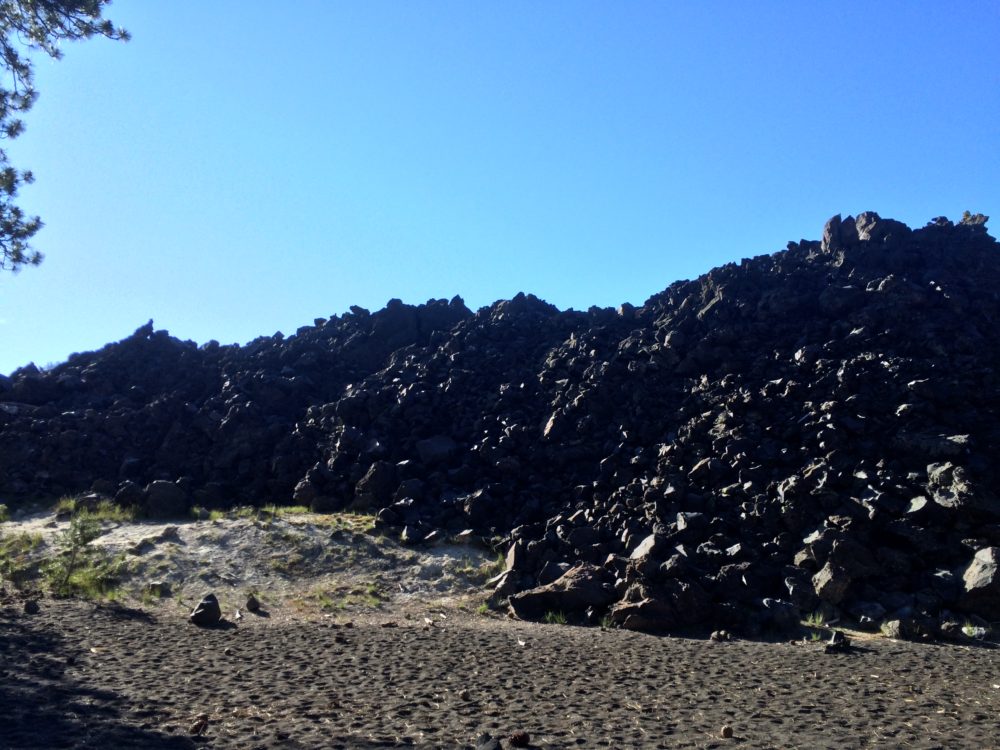 Turn left (south), following signed directions to the top of the Cinder Cone. Shortly, reach the base, where a very steep ascent over extremely loose cinders begins. By placing your feet in the tracks of previous hikers, you may be able to minimize the slippage common on such steep (30–35 degrees) and loose slopes. Fortunately, this section of trail is only about a quarter-mile in length—but it sill gains about 700 feet in the process, leaving mere mortals winded by the time they find easier going at the rim of the cone. 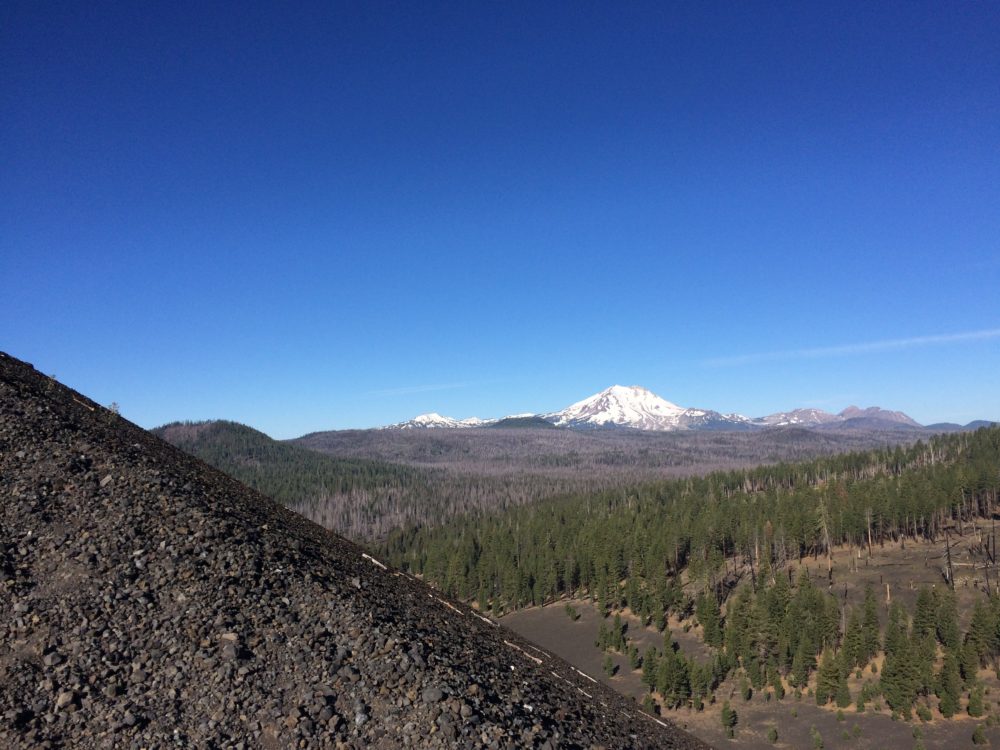 Views to distract you from the steep climb.

Twin concentric paths ring the lip of the cone and the inside of the crater, offering differing perspectives of this geological wonder. The view from the rim is remarkable, with several landmarks clearly visible, including Lassen Peak, Brokeoff Mountain, Prospect Peak, Chaos Crags, and Reading Peak. Closer at hand, Snag Lake and Butte Lake bookend the dark expanse of the Fantastic Lava Beds, formed by a series of Cinder Cone basalt eruptions that occurred within the  last 500 years. The colorful Painted Dunes lie near the southeast base of the cone. 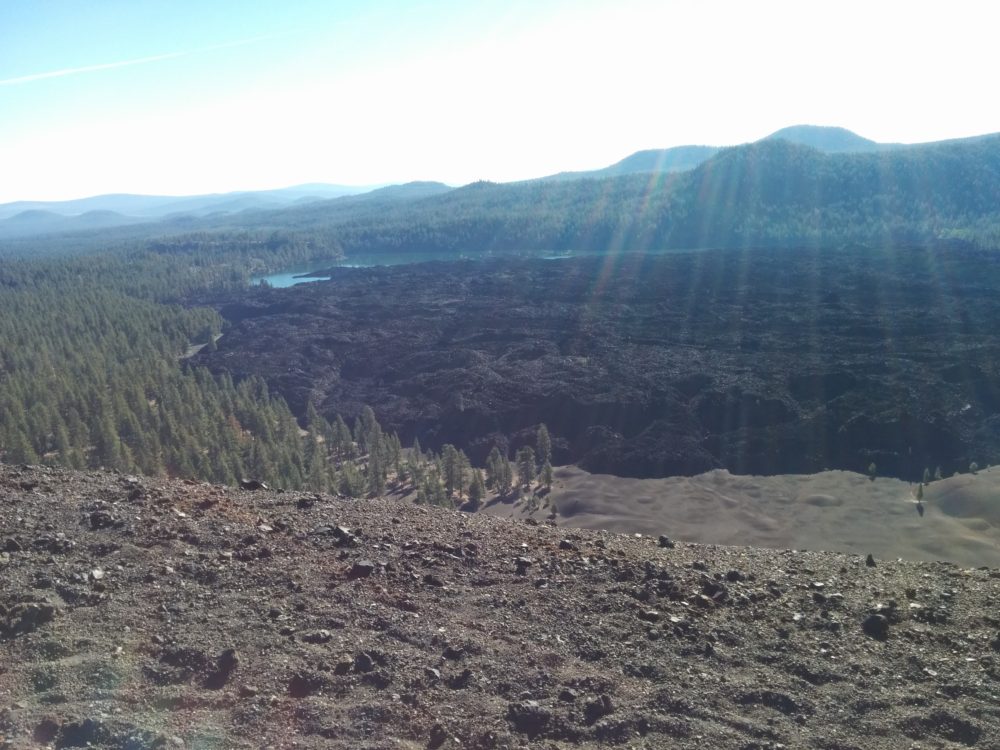 Looking out at the Painted Dunes.

After spending the time to fully appreciate the views of and from the crater, you have the option of following a short loop around the south side of Cinder Cone, as described next, or simply retracing your steps to the trailhead. 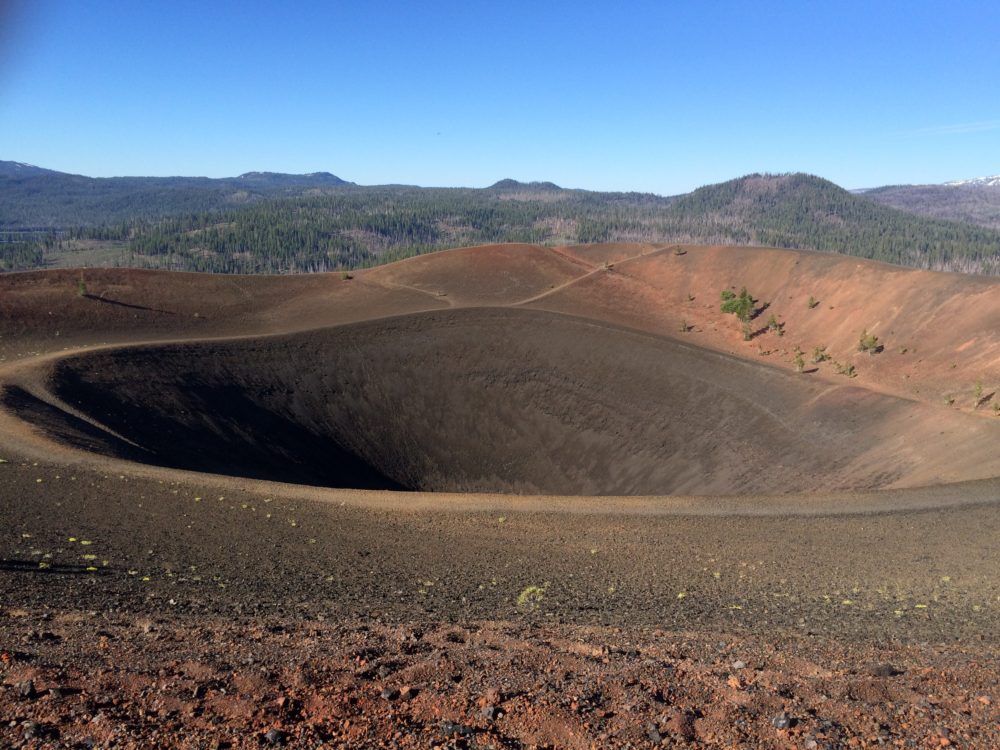 Looking into the crater of the volcano.

For the extended loop section, descend the trail that leaves the west side of the rim near a grove of stunted pines, and drop steeply away from the rim toward a minor ridge. Beyond the rim, the trail follows a descending traverse around the south base of the cone, past the multicolored Painted Dunes before bottoming out just before reaching a junction with a connector trail. Turn right (north) and make a moderate climb to a junction with the Nobles Emigrant Trail. From there, turn right (northeast) and follow the pioneer trail back to the trailhead.