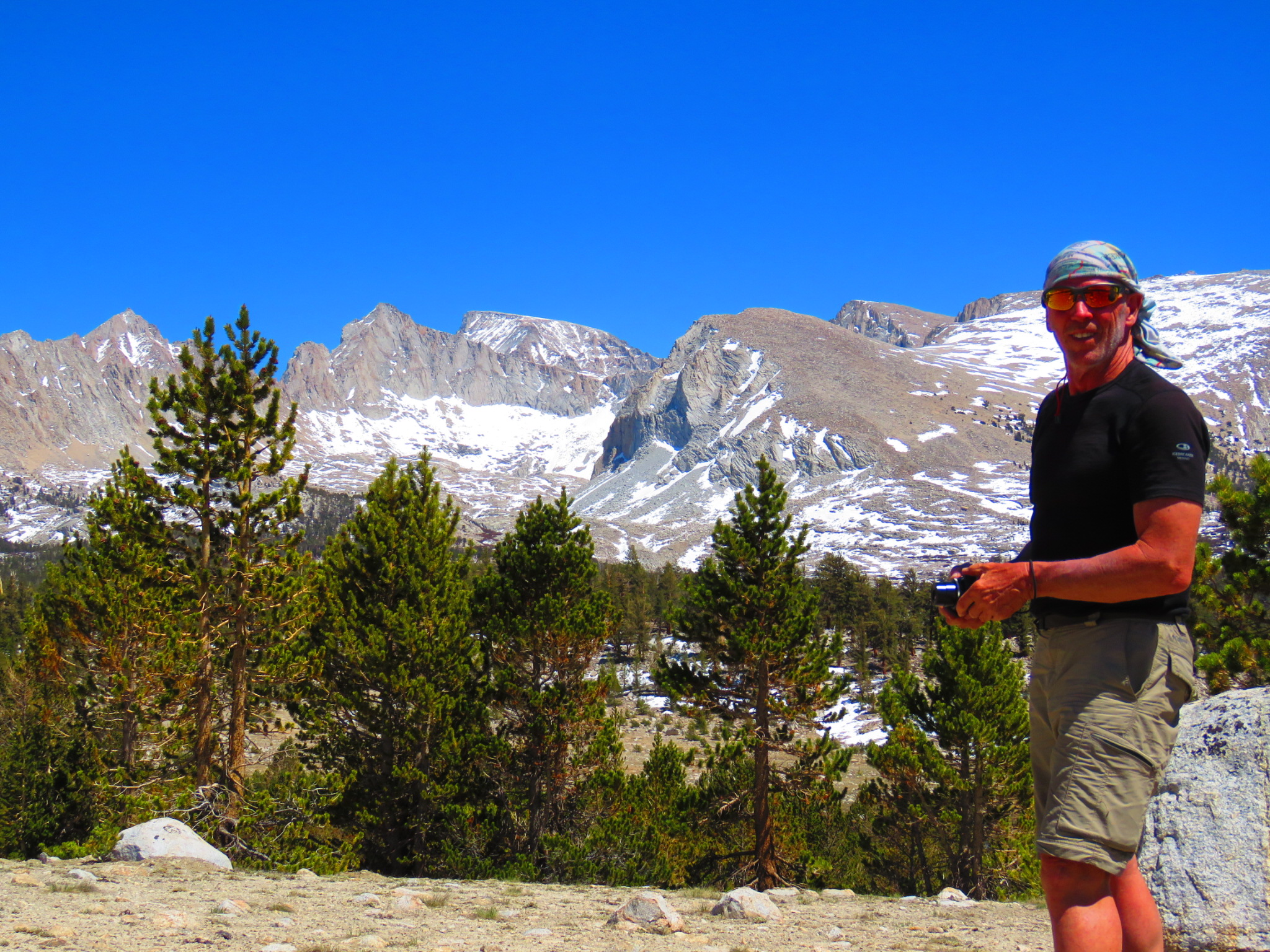 Jordan’s Diary from the PCT – Week 1

Wonderful day to drive from my home in Elk Grove, California just six hours down to Horseshoe Meadows south of Lone Pine to jump on the PCT near Cottonwood Pass.

Heading away from my first night’s bivy, I had a slow realization that Elk Grove was at 46 feet above sea level while my body was hurriedly informing me that the elevation at Horseshoe Meadows is exactly 10,000 feet higher.

Reality hits as my legs turn to jelly under the weight of an over-abundance of energy bars. Thoughts of distributing them to visiting tourists occupy my mind as we head toward Cottonwood Pass. (Pass, n. a geographical location doomed to be at a far higher point than your current location). Our day of oxygen-sucking ended at a beautiful little tarn called Chicken Spring Lake. 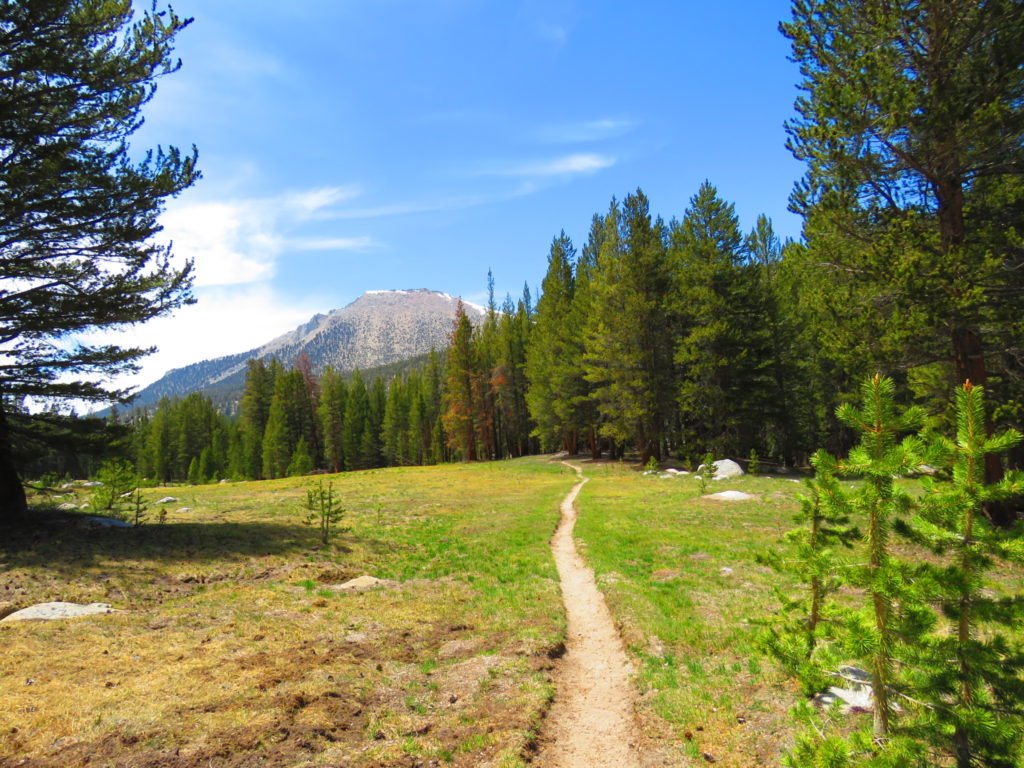 Past Siberian Outpost to Rock Creek
OK—11 miles does stink, but it felt better than yesterday. The snow isn’t everywhere but when it covers the trail, it multiplies the effort to hike. Foxtail pines beautify the slopes here. 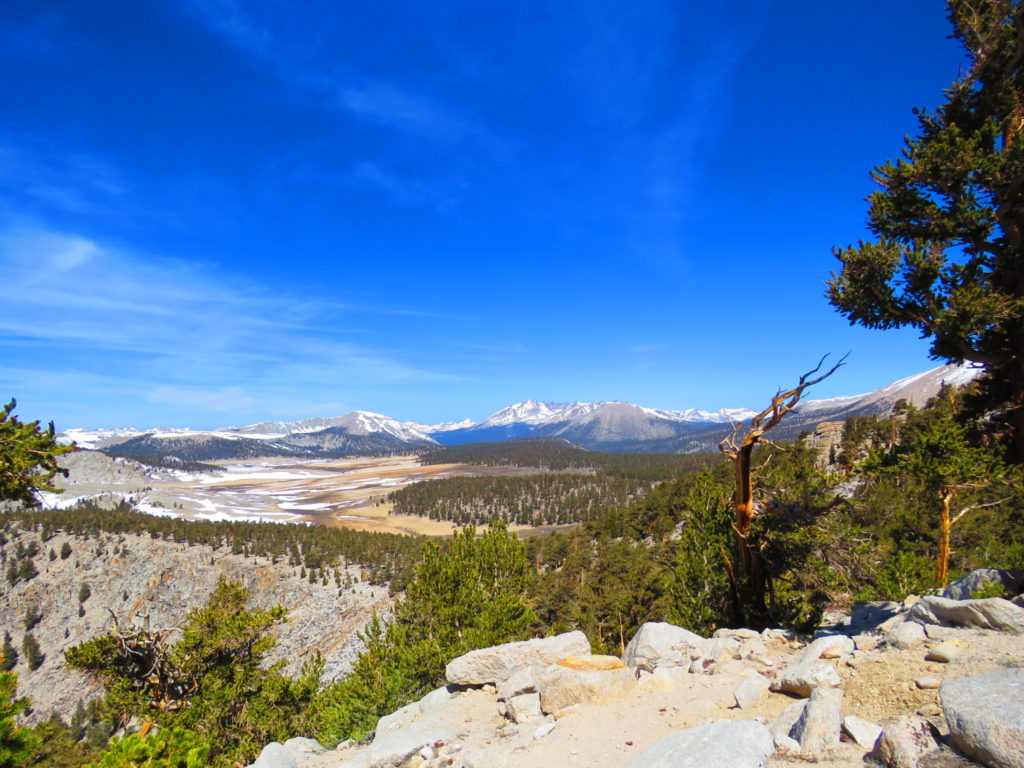 These “Pack-it-Gourmet” meals are so worth every penny. Edible food on the trail – what a concept. (And I think they’d be good when fully cooked too.) Sneaking up on Mt. Whitney to camp at Crabtree Meadows and hear reports of not–such-great times on Whitney. The cheeriest report involves an 0300 start time in order to travel on crusted snow past Guitar Lake to summit at dawn and then return by 1100 after post-holing through melting snow. The least rosy report included a self-arrest on the wrong side of the trail and hours of gaining it again. Having previously ascended Whitney under ideal conditions by three routes, we headed north to Tyndall Creek. 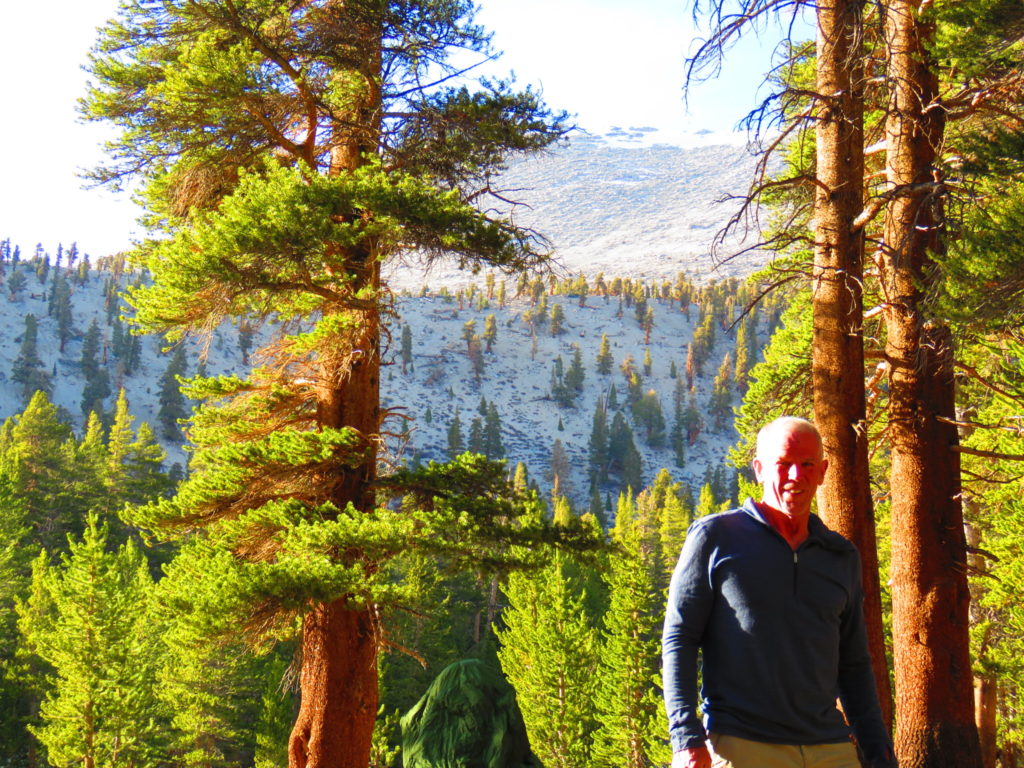 Can’t wait to dance across Tyndall Creek in the morning—early in the morning. Early as in when the air temperature makes you just happy to still be alive after your first breath. Aah. And the chance to walk 15 feet through glistening, rushing, frigid water that’s 3 feet deep. 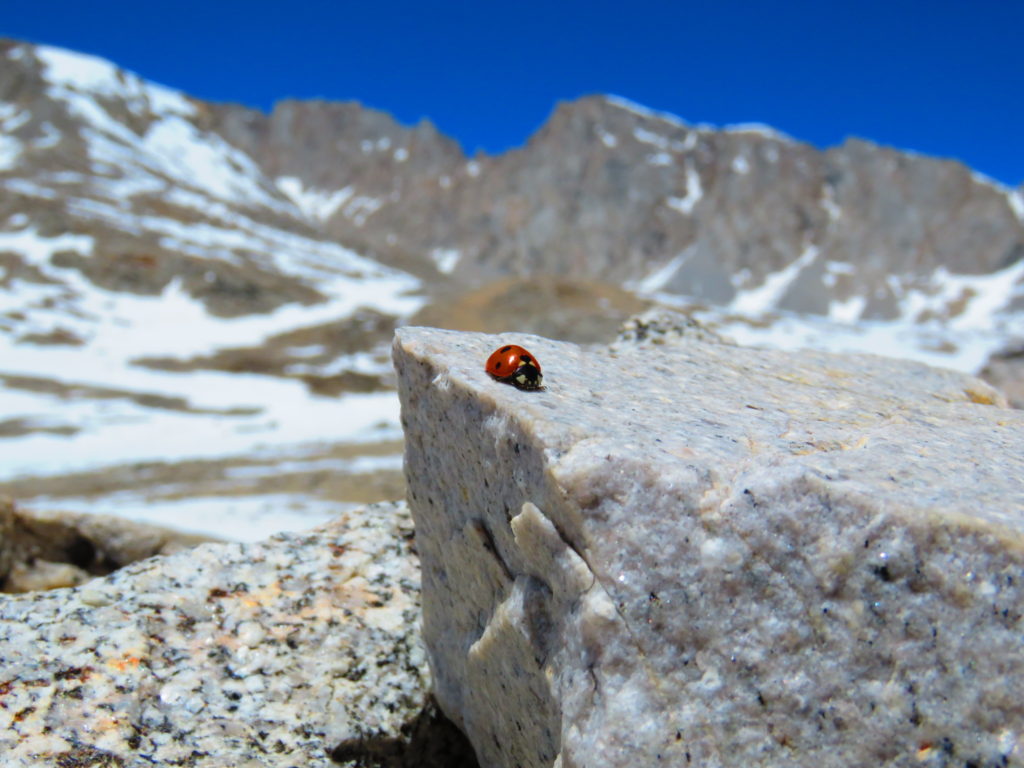 A beautiful day of steady uphill hiking through all the water needed to fix the drought, we headed toward the base of Forester Pass—the highest on the PCT and JMT at 13200’. We need to climb a steep slope before finding any trail and so we must wait until morning to embark on frozen snow. 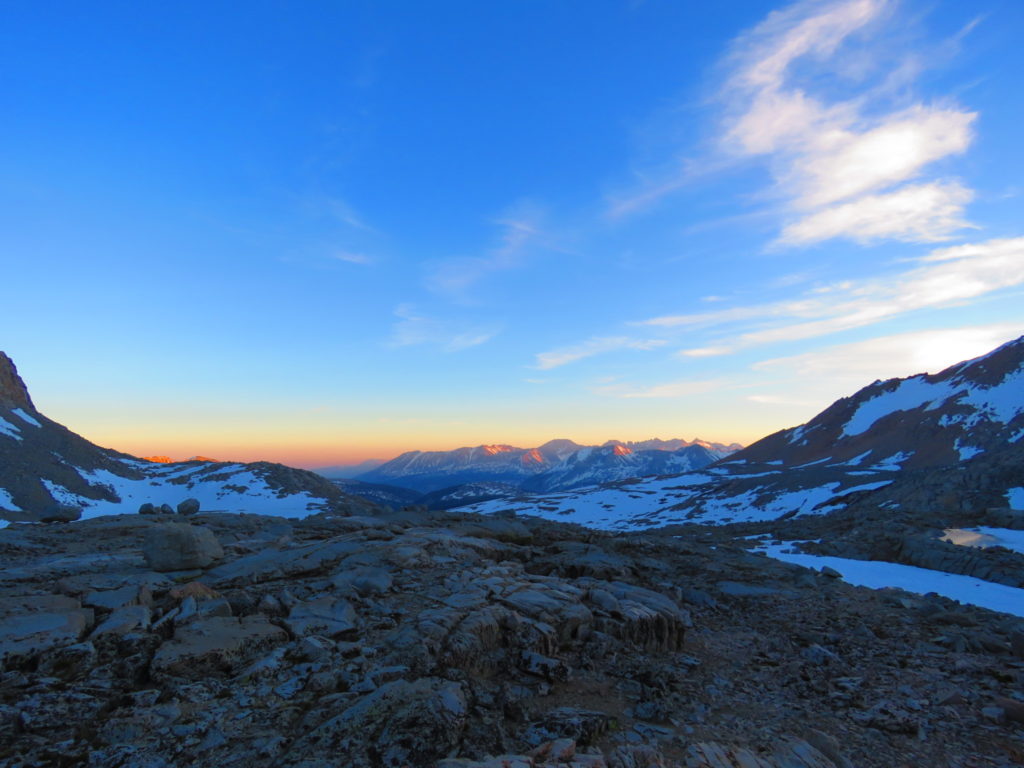 Headed up Forester Pass at 0630. The micro spikes worked well and we took relatively little time getting up and over. The climb over the cornice was a surprise treat but the walk down was a total burden of progressively worsening post-holing, which we halted after about 4 miles. 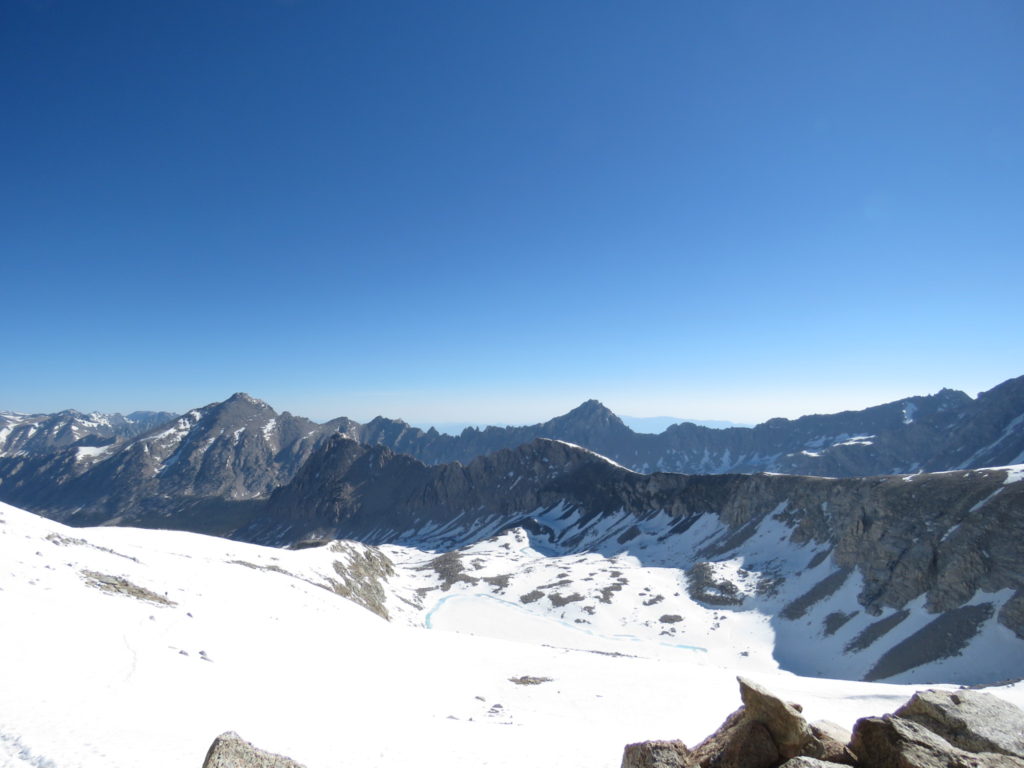 We made it down Bubbs Creek toward Charlotte Lakes, passing the Kearsarge Pinnacles. We headed up past Bullfrog Lakes to Kearsarge Pass in order to go out to resupply at Bishop. 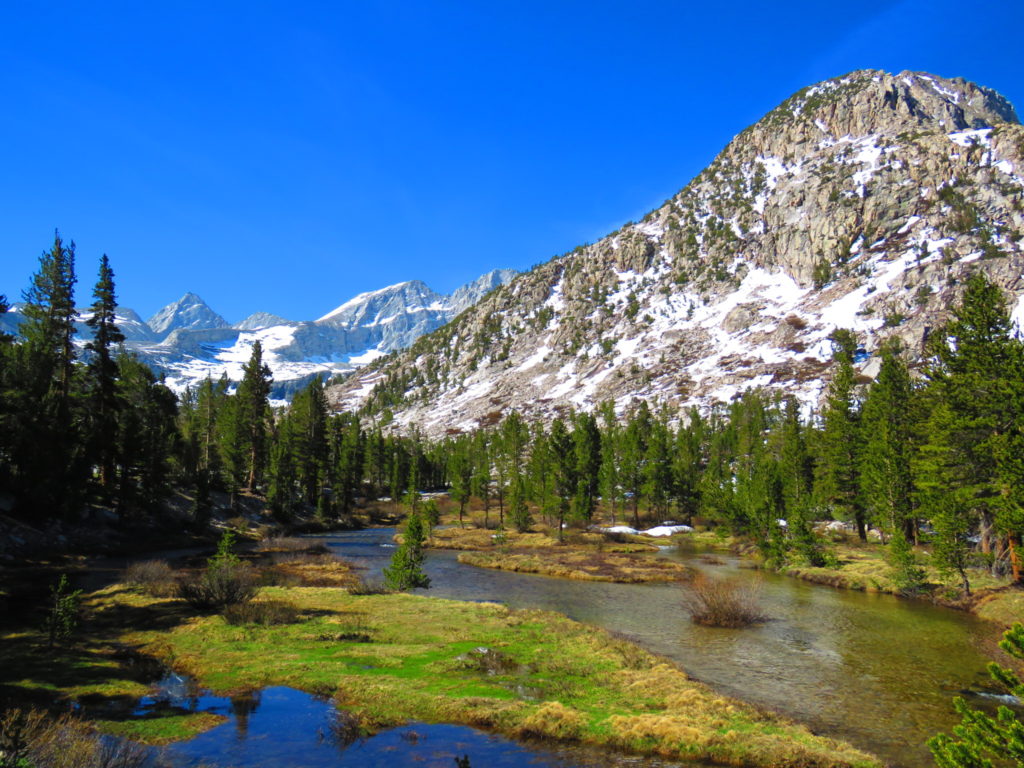 The slight sunburn on my toes and a small portion of my left foot turns out to be more serious—mostly 2nd degree serious—as in blistered sunburn. I can’t do anything other than wait for it to subside and treat against infection and skin damage. I will be off the trail for about a week—returning via Kearsarge Pass about the 16th. We should benefit by some additional snow melting. 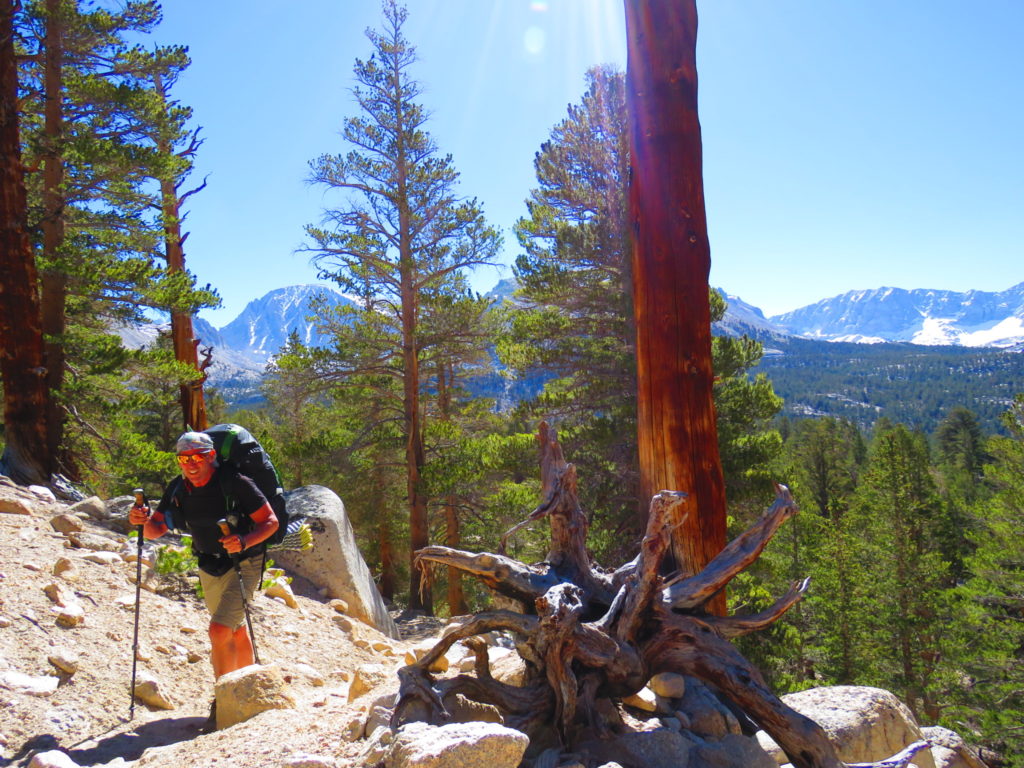 Able to smile unaided by oxygen